There are many similarities in all fire stations: big red vehicles, small sleeping rooms, kitchens with four refrigerators (really). But there is also something unique about each station. Station 1 downtown is the largest in the city, with eight apparatus; Station 17 in City Heights is the busiest single-engine station, with 5,900 calls last year, or an average of 16 calls in a 24-hour day. And Station 33 in Rancho Bernardo has the largest district at just over 25 square miles.

On the map, Station 33’s district goes from Lake Hodges on the west, along Highway 78 about six miles past the San Diego Zoo Safari Park on the north and east, and down to where I-15 meets Camino del Norte on the south. It’s a lot of territory, but firefighters are quick to point out that the district for any fire station is pretty much wherever they are needed. In Station 33’s case, that could mean they go anywhere in the state during fire season.

CREWS FROM STATION 33 CAN BE SENT ALL OVER THE STATE 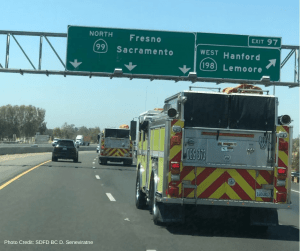 It is one of two stations in San Diego where the state Office of Emergency Services (OES) has placed a brush engine. It belongs to the state but is maintained by the city and operated by San Diego Fire-Rescue. When there is a wildfire, OES can call for that brush engine to go, like it did last week. The idea is that it will be an additional resource in Southern California, but it has been sent all over the state, and in the summer and fall, it’s not unusual for that engine to be gone from San Diego 75 percent of the time. Of course, if it’s not dispatched by the state and SDFD needs it, the engine is available. The only difference between the OES brush engine and an SDFD brush engine is that the OES rig is neon green, not red.

When the engine goes, the on-duty crew at Station 33 goes with it, and firefighters cover their shifts on overtime. Jason Paine has been a captain at Station 33 for nearly four years, longer than any other captain on duty there now, and getting the chance to be out on wildfires is one of the things he likes about the assignment.

But he likes it when he’s at the station too. Organizations in Rancho Bernardo like to have Engine 33 make an appearance at events, and the community seems to take a unique interest in the station and its crews. The firefighters have responded by hosting open houses during Fire Prevention Week and regularly opening their doors to scouts, school classes, and community groups.

THE STATION GREW TO MEET THE NEEDS OF A GROWING COMMUNITY 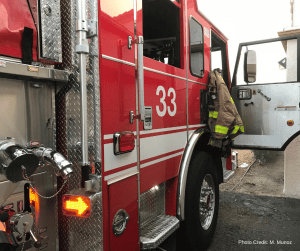 Station 33 was built in 1969 when Rancho Bernardo was a new community. Forty years later, RB had grown by the thousands, and the fire station had gone from four crew members with one engine to six people with an engine, a brush engine, and an ambulance. It was crowded quarters. The city, and the community, responded.

The Rancho Bernardo Community Council launched a campaign to expand and upgrade the fire station. The council held a series of fundraisers, and the city came up with more than a million dollars for the project.

For several months in 2009, the crew was moved into a trailer behind the station. The interior was gutted, expanded, and remodeled. The “new” Station 33 opened in January of 2010. The Rancho Bernardo Community Council continues to support the station, and, as Captain Paine puts it, “the community takes care of us.” Station 33, of course, takes care of the community too.

The July Station of the Month is sponsored by Farmers Insurance Agent Kevin Cox.