The Air Operations Division of the San Diego Fire-Rescue Department was born in 2000 when the City contracted with a helicopter operator. After the Cedar Fire in 2003, which at the time was the largest wildfire in California history, the City saw the value of having its own air operations division. Copter 1 was purchased and staffed and soon ran 400 calls a year. Each helicopter is equipped for fires, hoist rescues, and advanced life support. 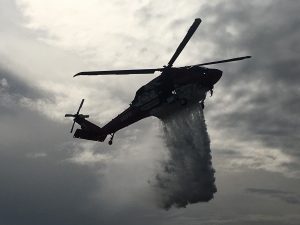 The 2007 Witch Creek Fire convinced the City to expand the fleet, and Copter 2 was purchased. Copters 1 and 2 can each carry 300 gallons of water to a fire and can fill their tanks with water from a pond or river in less than a minute. It’s generally understood that, because of the maintenance and inspections required, to keep one helicopter available all the time, you need two helicopters.

SDFD ADDS TO ITS FLEET

In 2019, the Department upped its game considerably with the purchase of a Sikorsky Firehawk. It can drop 1,000 gallons of water on a fire and can refill its tank in 45 seconds.

Housed at Montgomery Field in Kearny Mesa, the Air Operations full-time staff is a battalion chief, three pilots, three fire captain/crew chiefs, and four rescue medics. The crews rotate on 24-hour schedules, similar to the crews at fire stations. While there are three helicopters, half of the year, there is one crew on duty twenty-four hours a day. From July 1 to December 31, there’s a second crew on duty 10 hours a day.

EVERY MEMBER HAS AN EQUAL VETO

The captain’s responsibility in Air Ops is different from that of a captain in a fire station. At Air Ops, the captain is in charge of the medic and the tactics. The pilot is in command of the helicopter. Perhaps more than anywhere else in the fire department, the three of them operate as a team. Air Operations Chief Chuck Macfarland says their slogan is “3 to go, 1 to no.” If any crew member doesn’t agree with the plan for a rescue or a fire, they regroup and discuss it. Maybe the medic doesn’t think dropping him into a particular spot at a rescue is the right approach. Or perhaps the pilot doesn’t think the conditions are suitable for a water drop on a particular hillside. Every member has an equal veto. 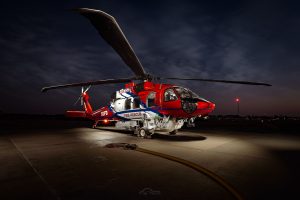 Because they have the ability to lower a paramedic into a precarious position and hoist a patient up and flown to the hospital, the helicopters have been a tremendous asset for rescues on Cowles Mountain and at seaside cliffs. They are also familiar with Iron Mountain in Poway. San Diego’s Air Operations Division is a regional asset.

Ours are also the only fire-rescue helicopters in the county qualified for night flying. And while that is a great advantage, it is also exponentially more difficult. The crews train regularly, almost constantly. Macfarland says that whether they have a call or not, he wants them to fly every day, hone their skills, and practice their responsibilities.